The year of the pandemic has made significant changes to the commercial properties in Thailand. CBRE, a leading international property consultant, has reported the Bangkok office market witnessed a significant change in the net take-up while the retail market’s consumer confidence index fell and the hotel market struggled to maintain cash flow.

The adoption of work-from-home did not only change how we implement social distancing during the COVID-19 pandemic period, but it will be here to stay as well. Many organisations have revisited their workplace strategy, and some have started changing how and where each business unit operates.

The change in behaviour, coupled with financial pressure, resulted in contraction in space sizes by many tenants, especially in Grade B Non-CBD locations where tenants are more sensitive to financial illiquidity. In addition, some tenants were unable to move into their office space as the office fit-out could not commence due to the lockdown. CBRE Research found that in the first nine months of 2020, the net take-up increased by 21,000 square metres compared to 128,000 square metres in the same period last year. However, CBRE Research also reported that office pre-leases were seen in the growing businesses such as e-commerce and technology platforms where the demand for workspace has doubled. 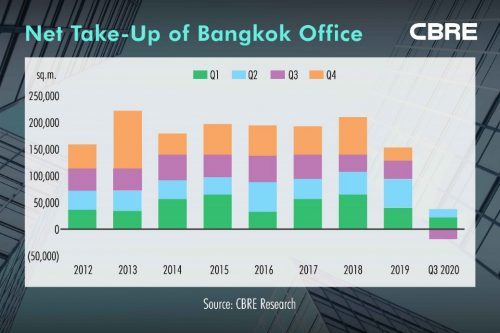 According to CBRE Research, the total office supply in Bangkok as of Q3 2020 was 9.17 million square metres, increasing by 2.1% Y-o-Y with key completions being Spring Tower and The PARQ in the first quarter of the year. While this year has new office supply of 345,900 square metres, the negative take-up has resulted in the increase in vacancy rate from 6.9% at the end of last year to 8.9% as of Q3 2020.

While the overall occupancy in the Bangkok office market has slightly dropped to 91.1%, the best performer this year is in the Grade A Non-CBD segment where the total supply is only 674,000 square metres, representing 7.4% of the total supply in the market. The expansion of mass transit systems and urban development have increased the attractiveness of high-quality buildings in Non-CBD locations where rents are much lower compared to CBD locations.

Ms. Roongrat Veeraparkkaroon, Head of Advisory & Transaction Services – Office, CBRE Thailand, commented, “There has been limited movement in rental growth this year as landlords mostly keep the same rate to retain and help tenants during this difficult time. Some landlords even offered special discounts for a short period in Q2 and Q3 to help those industries which have been directly affected by the COVID-19 pandemic.”

The main challenge faced by the Bangkok office market continued to be the incoming under construction supply of over 1.17 million square metres which will likely come into the market within the next three years.”

Thailand’s retail industry has experienced diminished footfall and a drop in spending power as a result of the COVID-19 pandemic. Consumer confidence index also fell to its lowest point in 20 years in April 2020 at 47.2. Even though the confidence has improved in the following months, it is still a long way from its pre-COVID-19 level. Due to business disruptions and increasing financial burden, the household debt as of Q2 2020 was at 83.8% of the total GDP, increasing from 78.9% last year. 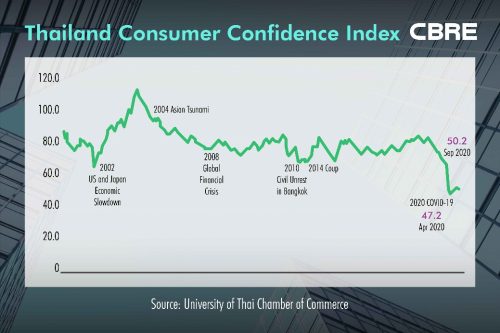 CBRE Research also reported that the Bangkok retail supply totalled 7.8 million square metres as of Q3 2020, increasing by 2.4% Y-o-Y from the opening of 12 new retail developments with combined retail space of 100,000 square metres with Siam Premium Outlet being the biggest development this year.

While the occupancy rate across the market remained high at 96%, CBRE Research has started seeing a drop in retail developments in downtown areas of Bangkok which are more dependent on demand from tourists rather than locals like those in the midtown and suburban locations. Some retailers, especially F&B, are considering using less space per store and focusing more on delivery services following the growth of online food ordering in Thailand.

“The retail trend highlight this year has been the remarkable growth of the e-commerce industry in Thailand and how retailers adapted to online retail sales after social distancing measures were implemented. We had been talking about the necessity of omni-channel sales in the changing retail landscape and COVID-19 has acted as the catalyst to speed up the process,” stated Ms. Jariya Thumtrongkitkul, Head of Advisory & Transaction Service – Retail, CBRE Thailand.

How fast the retail industry can recover from COVID-19 will largely depend on how effective the stimuli from the government such as “Kon-La-Khrueng” (Let’s Go Halves) and “Rao-Tiew-Duay-Gun” (We Travel Together) campaigns are as well as when international travel restrictions will be lifted. The amount of retail space in the market, especially in Bangkok, cannot be sustained only by domestic demand in the long run.

Tourism, one of the key sectors that drives the Thai economy, has suffered greatly this year as there were no inbound international tourists from Q2 onwards. The total tourist arrivals for the first nine months in 2020 stood at only 6.7 million compared to almost 30 million in the same period last year.

Bangkok hotels have seen the average occupancy drop to as low as 6.7% in April after the country went into lockdown; but managed to recover slightly to 13.7% in the third quarter, solely relying on staycation trend. Despite the lifting of the lockdown measures in June and hotels being allowed to resume operations, there was no significant sign of improvement in the market as international travel restrictions have been still in effect.

Some hotels have decided to open partially with discounted price while some operate only their F&B outlets to generate some revenue to keep cash flow going. “Some hotel owners are facing a situation that they have never planned for, a scenario where there have been no tourists for more than nine months. This has put them under pressure and some have decided to put their properties on the market. However, the gaps in expectations between sellers and buyers are still relatively large which makes it hard to close deals. CBRE believes that these gaps will be narrower next year as pressure for sellers pile up,” said Mr. Atakawee Choosang, Head of Capital Markets – CBRE Hotels, Thailand.

As of Q3 2020, the total hotel supply in Bangkok was at almost 50,000 keys, increasing from the previous year by only 2.8% as there were limited hotel openings this year. Based on what has been announced, CBRE Research has estimated that there will be 9,200 more keys that will be added into the Bangkok hotel market by 2023 which will further intensify competition.